I’m resurrecting this post (4 Jan 2014) with an update on afternoon tea at Neverland Tea Salon.

I had afternoon tea (I refuse to call it High Tea) at Neverland Tea Salon last November with my friend. Four years ago, I mentioned that their afternoon tea was $30. There is now Demi Tea for $25 (with a vegan option for $26) and High Tea for $38 (also with a vegan option for $40). For financial reasons and from my previous experience (one’s eyes are bigger than one’s stomach), we opted for Demi Tea. Demi Tea includes up to two pots of tea per person, three sandwich varieties, two types of sweets, and one scone. It’s interesting to note that this is one of the very few places I’ve been to which serves scones last but it’s clever because scones usually take up so much room.

Picking tea is always difficult, especially when there’s an array of tea blends that all sound delectable. It took me a while before I settled on Summer in Provence (sweet tea with lavender and vanilla) and December Rose (lavender, mint, rose, verbena, elderflower). By the way, I’ve also tried Heavenly Cream (creamy vanilla and bergamot) and it’s the perfect tea blend with milk and sugar.

I was satisfied with the food and quantity although I would have preferred more than two types of dessert. Otherwise, I was happy with the price of the Demi Tea.

It’s no surprise that Neverland Tea Salon continues to be one of the most popular venues for afternoon tea!

On New Year’s Eve 2013, I visited Neverland Tea Salon with my friend, who is also a Oncer fan. 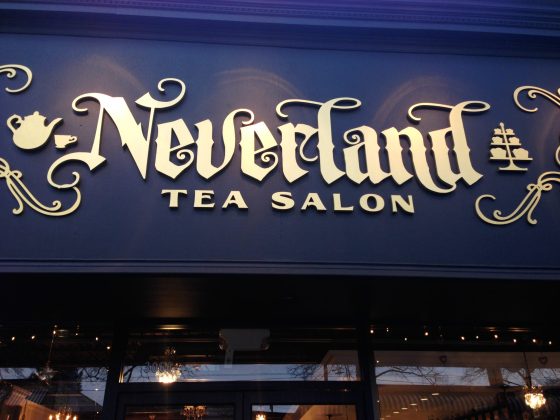 Neverland is a new English-inspired tea salon in Kitsilano with a Peter Pan (by J.M. Barrie) theme. It has its own tea selection, many of which bore Peter Pan-inspired names. I did not get the chance to smell each caddy, though I would have liked to. I settled for ‘Take Me To Neverland’ tea latte, which tasted similar to London Fog.

A wall of tea caddies

This was a rather small tea salon, much like La Petite Cuillère, but very popular. I would recommend reserving a table in advance. Since I did not have the chance to try their afternoon tea ($30 for ‘High Tea’), I can’t really recommend anything specific. I had a breakfast sandwich (with green salad) from their Brunch Menu, which was good but I felt the price was a bit more than I would have liked to spend. I’d initially though it was soup and sandwich but I ended up with salad instead of soup.

The average item starts from $11+. Aside from tea, Neverland also has a Lost Boys’ Bar with tea-infused cocktails (looks like Urban Tea Merchant isn’t the only one anymore!), as well as beer and wine.

This is a cute place to take your little ones to or to enjoy some tea with your friends. I hope there will be more like it for it’s always nice to be transferred to another world. 🙂