If the trailer theme for Cinderella (2015) was to “have courage and be kind” (#bekind), Disney’s upcoming live-action Beauty and the Beast is telling us to be their guest(s) (#BeOurGuest) and learn more about the heroine, Belle. Interestingly enough, ‘Be Our Guest’ was the opening song in the 1991 trailer:

Disney’s remake is an ’empowered’ Belle, who is brave, intelligent, kind (she teaches a little girl to read), an inventor (rather than Belle’s father) and a bookworm. The small town inhabitants notice that she’s very beautiful but so unlike them that she feels isolated – much like the Belle in the animated version. From the new trailers, we learn a little more about Belle:

“You’re so ahead of your time.” – Belle’s father, Maurice

Also, contrary to what most anti-fairytale people think, Emma argues that Belle does not have Stockholm Syndrome. I completely agree. Even in the animation, we see that she’s stubborn and it’s not until the Beast comes in to help her fight off the wolves that she slowly warms up to him. The Beast too, slowly changes and works on controlling his temper. It goes from friendship to love. If Belle were the sort to give her heart away so easily, she would have been Gaston’s Missus. Moreover, Belle is blessed to grow up (to adulthood) with at least one loving parent (unlike some other Disney heroines). She may feel isolated but she is confident.

On another note (get ready for the rant), I want to emphasise that each Disney princess is strong in her own way. I’m quite tired of hearing people criticising the original Disney princesses, namely, the pre-1990’s princesses: Snow White, Aurora, and Cinderella. It’s important to remember that Disney’s B&B animation came out in 1991, around 3-4 decades after Sleeping Beauty (1959) and Cinderella (1950), and 6 decades after Snow White (1937). Each heroine is not only from a different ‘time period’ in the animation but was also created to reflect [some of] the women of the decade.

Snow White grew up with a vain stepmother who forced her into living like a scullery maid (scrubbing the floors and drawing water from the well). Unfortunately, she meets a prince who eventually rescues and takes her to his kingdom. Princess Aurora or Briar Rose grew up as a peasant girl in the woods and believes the man she met is a fellow commoner. She’s horrified to discover that she’s a princess and her parents had already arranged her marriage to some man named Prince Philip when she was a baby. Unfortunately, she marries said prince who – thankfully – turned out to be the peasant boy. Cinderella lost her beloved father at a young age and was abused by her stepmother and stepsisters. She was forced to become a maid (practically a slave) and unfortunately, ends up marrying the prince (whom she’d thought was a guard or courtier at first).

Yes, one of the biggest problems is that they only met their future husbands once – very briefly – and were married right away. I blame the fact that the films are too short and we didn’t get a chance to know the princes and the film usually ends with a wedding. But since it’s a fairytale – which often has elements of reality – who’s to say that the princesses didn’t eventually work to ban children as miners, regulate working hours for servants, or ban arranged marriages?

We might not all have a princess we can relate to but I’m certain that there will be many more to come with different personalities and experiences to whom others can relate. To call these princesses – and other women AND men who relate to or admire them – weak is not only insulting but not constructive.  In my opinion, if all the Disney princesses met each other, I’m certain they could all get along and work together to better the world.

What do we know so far?

Left and centre: Portrait at the Disney Store UK Oxford St. Right: Portrait in the film.

Where does this take place?

Although the film was filmed inside a studio, we know that B&B is set in France (“in the hidden heart of France”). After all, the villagers say bonjour and just about everyone has a French name if not a French accent. Apparently, the little town is inspired by the northeastern part of France with half-timber houses and cobble stone streets. I’ve constantly wondered if Belle was living close to the border of Germany because the Beast’s castle is so isolated.

The trailer also shows the Notre Dame which makes me wonder if Belle and her parents used to live in Paris? (One of the songs indicates that they lived in Montmartre.)

Animator Glen Keane based the Beast’s Castle on Château de Chambord (which had been a royal hunting lodge) in the Loire-et-Cher region in France (this picture certainly reminds me of the spiral staircase Belle ran down). As for the exterior, the Castle reminds me of Neuschwanstein, Lichtenstein Castle, and Burg Hohenzollern. 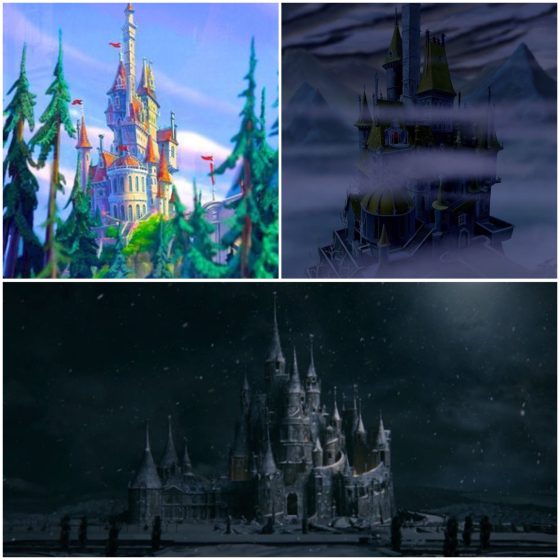 The teaser trailer shows parts of the Castle’s interior. The room with the piano reminds me of the Amalienburg on the grounds of Nymphenburg Palace.

What time period is the film set in?

Costumes are usually an indication of the time period of a fairytale film and in this case, so we knew that this was set around the 18th Century. (One of my readers, Jez, convinced me to include it in the Upcoming Period Dramas 2017 list although I was hesitant at first. Ironically, I had no problem including Cinderella in 2015!) To be specific, the film is set in “the first half of the 18th Century,” according to director Bill Condon. British costume designer Jacqueline Durran (Pride & Prejudice, Atonement, Anna Karenina) has given us plenty of robes a la francaise to admire in this one scene in the ballroom. I’m not expert, but I’m narrowing down the time period to 1730-50.

Jacqueline works closely with Emma on dressing Belle, who – through her clothes – is an active princess and cannot be slowed down by heavy layers or corsets. This helpful featurette explains the decisions made (essentially, why she’s the least 18th-Century dressed character in the film):

Blue Dress – It’s very similar to the one in the animation except there are lots of pockets for Belle and she’s wearing booties rather than ballerina flat shoes.

Teal Dress – This is one dress Belle wears during her early days in the castle.

Pink Dress – Also known as the ‘Something There’ dress, complete with hooded cape!

Floral Library Dress – Instead of a green dress, Belle wears a floral embroidered white dress to the library.

Yellow Dress – Featuring Swarovski crystals (as did Cinderella’s) and gold-leaf ornate designs, the iconic yellow dress is made to look beautiful when Belle’s dancing in it. I won’t lie; upon first glance, I thought the dress was underwhelming and didn’t match the period. After seeing the clip of Emma waltzing with the Beast, I loved how it looked like Belle was floating.

White Chemise Dress – Belle is wearing this when she returns to the castle. I imagine it would have been worn under the yellow dress (even if she didn’t for the film).

Celebration Dress – According to Disney, it’s a celebration dress and not a wedding dress. I’m just going to assume that there isn’t going to be a wedding.

Song(s) as Old as Rhyme

“I want adventure in a great wide somewhere. I want it more than I can tell… I want so much more than they’ve got planned.”

“There’s something sweet and almost kind but he was mean and he was coarse and unrefined. And now he’s dear and so unsure. I wonder why I didn’t see it there before.”

In the Disney animation, the original song for the credits was sung by Celine Dion and Peabo Bryson. For the live-action movie, Ariana Grande and John Legend will sing ‘Beauty and the Beast’, which we heard in the latest trailer.

Beauty and the Beast premieres worldwide on Friday, 17 March 2017 (aka St Patrick’s Day). 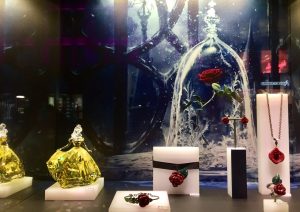