Ever since ITV’s 6-series Downton Abbey came to a close last year (earlier this year for American & Canadian viewers), we the DA / period drama fans were left with a void on our Sundays. Whatever were we going to do with our lives now that we had no idea what would become of the Crawley family and the Downstairs staff after the 1920’s? (But then, one wonders, how long would we have wanted the series to go on for? To WWII? Or post-war?)

Of course, we know there will always be more period/historical dramas to attract new fans. In fact, it seems that the best way to attract the attention of Downton fans is to feature the new film or book with headlines such as: Is [Title] the New ‘Downton Abbey’? 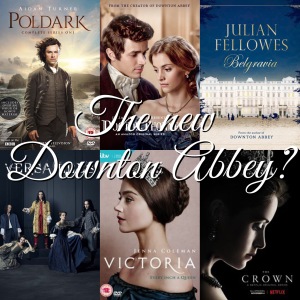 Although the first series of the remake of BBC’s Poldark premiered just before S6 of Downton Abbey, it had already been hailed as the new Downton Abbey. There’s the upper and lower classes, the beautiful 18th Century costumes, natural coastal beauty of Cornwall, and.. a dark and handsome Ross Poldark. Oh and romance. Series 2, unfortunately, premiered on the same day in the UK as ITV’s Victoria and I’m afraid I went for the latter. Nevertheless, there will be more series to follow so stay tuned!

This three-part romantic drama set in 1850’s England is light and full of pretty costumes with crowns of spring flowers in the young ladies’ hair. According to Julian Fellowes, who wrote the screenplay, it is not meant to be the new Downton. However, the topic of wealth and classes (especially where marriage is concerned) is covered in this series. The ending is a happy and almost too perfect one. But it doesn’t matter whether or not it’s unrealistic. The world’s full of tragedies and Julian is the best period drama doctor!

Earlier this year, Julian Fellowes debuted his new ‘novel’, Belgravia, which was originally a weekly 11-part audiobook but is now available as a book and e-book. By the way, I highly recommend going with the audiobook as it will be like listening to a period drama without seeing the scenes. It’s very well read and each character has his/her own distinct voice and accent. As the title indicates, it’s set in 1815 and 1840’s London. More specifically, Belgravia (although other parts of London, England, and Europe are mentioned too). At first I thought this was nothing like Downton but Julian makes sure that we hear from the Downstairs staff too.

When I first heard of Versailles, I was looking forward to architecture and costumes galore, plus plenty of Baroque music. I thought it would be similar to A Little Chaos, something focusing mainly on how the Palace of Versailles was designed/built. What I did not expect was how dark the series would be. There were definitely torture scenes I did not need to see. Those who’ve watched GoT will be prepped for the gruesome and raunchy scenes. New Downton? No. Even some articles called it as something grander than Downton. I can agree that the costumes are grander (because of the time period) but for me, this is a temporary replacement of GoT, one that has a specific time period and revolves around historical figures. S2 will be out next year, followed by a third at some point.

I wasn’t sure if this 8-part drama would catch on but I was hooked after watching the first episode. From the original score (featuring the Mediaeval Baebes), elegant interiors of historic houses, to the hundreds of gorgeous costumes that Victoria wears, Victoria was hailed as the ‘Downton with crowns‘. There’s even a small group of Downstairs staff we get to know (albeit too small to be realistic for running Buckingham Palace). As for romance, viewers like me have fallen in love with Victoria and Albert over and over again. S1 ends around the same time as the film The Young Victoria, with the birth of the Princess Royal, Princess Victoria. For American and Canadian viewers, Victoria will premiere on 15 January 2017, the perfect way to start the new year. Victoria returns next year with S2 in the autumn followed by a Christmas Special. Who knows, if the series is successful, we may enjoy more of V&A on Sunday nights!

Last week, Netflix premiered the 10-part drama based on our Queen’s rise to the throne. Many signed up for Netflix simply to watch the series. I couldn’t stop binge watching the series, staying up late until my knackered body forced myself to press pause. S2 is currently being filmed and there have already been news of The Crown series having 60 episodes altogether. That should keep all of us hooked for the next 5 years! It is hardly surprising that it is one of the most expensive dramas filmed. Aside from sparkling replica crown jewels and haute couture gowns, the series is filmed inside Lancaster House and other listed buildings around the UK, as well as South Africa (also, don’t forget the cost of filming the exterior of Buckingham Palace from the Mall, for instance). Although, like most dramas, the series has its fair share of inaccuracies, viewers should remember it is a fictional account and simply enjoy it for what it is – a drama.

So, which of these is the new Downton? I believe The Crown has triumphed as the new addictive series.

3 thoughts on “The New Downton Abbey?”