Today, 7 September 2016, the 15th Summer Paralympics will kick off in Rio de Janeiro, Brazil. This is a special year as it is the first time a Latin American city and country will host the Paralympics. The event, which runs from 7-18 September, will feature two new sports, paracanoeing and paratriathlon, bringing the total number of sports to 22. 162 nations will be participating, including the first ever Refugee Paralympic Team of two. Lastly, 11 of this year’s Invictus Games 2016 competitors from five nations will be competing at their first Summer Paralympic Games.

I admit I have never really paid much attention to the Summer Games, be it for the Olympics or Paralympics. In fact, I did not have much interest in watching sports – other than football (soccer) and hockey, of course – until my hometown Vancouver hosted the 2010 Winter Games. Eager as a beaver, I signed up to volunteer for both the Olympics and Paralympics. In 2009, to my heart’s delight, I was accepted as a volunteer for the Winter Paralympics. Despite the fact that I knew almost nothing about the Paralympics, I was ecstatic. I was assigned to volunteer as an Event Host for ice sledge hockey. Little did I know that the experience was going to make me a passionate supporter of the Paralympics.

Prior to 2010, I had often thought that if I were ever to lose the ability to walk or dance, there was no point in being alive. (However, this is not what I thought of people with ‘disabilities’ – what an unsuitable term – so please do not misinterpret my sentence!) During my time as a volunteer, I had the opportunity to observe the athletes up close and to have a chat with some of them. I saw strength and confidence in every one of them. And, as athletes do, they made the sports look easy. That is, until we volunteers and attendees had the chance to try sports like sledging on the ice with two hockey picks (fun to slowly glide but who knew how tough it would be to turn!), wheelchair curling (hmm, easier to stand), and visually impaired biathlon (wait, I missed my cue!). If my fellow volunteers and I realised something, it was that the Paralympics were extremely challenging and just as fascinating to watch.

The term ‘disability’ is unfair. According to Oxford Dictionary, it is a a disadvantage, handicap, physical or mental condition that limits a person. Yet the athletes have proven time and again that they have ‘thisability’. Thisability to take on the same sports (e.g. ice hockey, basketball, archery, running) not in a limited manner but in a unique and more challenging – for us – way. They have shown us different ways to participate in sports.

We lamented that the Paralympics were hosted after the Olympics when many had returned to work and seemed to have little interest. Yet we were delighted that the school children who were invited to watch the events enjoyed them and cheered on the athletes. These very children were mini ambassadors for the Paralympics, spreading the word to their parents to come along to more events with them. As a hockey-loving nation, it was no surprise that the seats at the venue for ice-sledge hockey would be filled.

How to play sledge hockey at the #sochi2014 Paralympics, video http://t.co/eLePc3TNxU and graphic pic.twitter.com/k0XGuocaW8 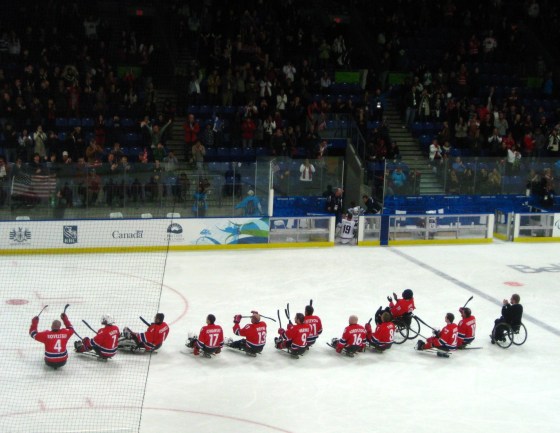 Crowds applauded the Norwegian ice sledge hockey players in the semifinal against the USA in 2010.

If I could take one lesson from the Paralympics, it’s that life does not end when we lose the ability to walk, dance, see, or hear (just found out that there are Deaflympics but deaf athletes may not participate in the Paralympics?). There are many ways to remain active and challenged. We do not become weaker. We become stronger.

Next year, I hope I can volunteer at the Invictus Games in Toronto, which will (hopefully) include ice sledge hockey for the first time! It will be exciting to see the passion these athletes will exhibit and to be reminded that there is still more to be achieved.

My Suggestions for the Paralympics

My hope is that the Paralympic Games will one day be enjoyed as much as the Olympics.

I don’t know what steps need to be taken but here are my ideas:

To everyone (yes I know it refers to Sochi 2014 but the quote applies to all Paralympics):

#Sochi2014 #Paralympics will surprise you, tremendous skills will excite you and examples of human endeavour will inspire you

Good luck to all the athletes giving their all these two weeks! We are so proud of you!