As Facebook celebrated its 10th birthday on Monday the 3rd, I celebrated 1 year without Facebook. I knew my anniversary was coming up and I had hoped to send out a mass email to my former Facebook contacts so that they would know that I wasn’t planning on returning to Facebook and how they could still keep in touch with me. I wanted to send out an email soon because it turns out many were unaware that I had deleted my account. They simply assumed I was either still on their contacts list or that I (or they) had accidentally deleted the other from the list.

What I have enjoyed

What I have missed

What I have learned

I am probably the only blogger who will not have a Facebook account or page but I have plenty of other things planned for TLATR so be patient! 🙂

Wise words from the Dowager Countess: 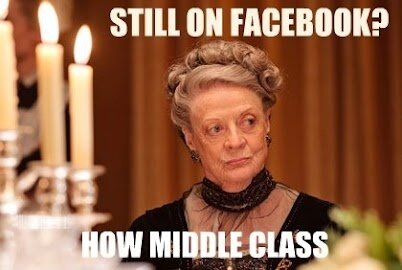 I did it. I no longer have an account on Facebook. I said I would delete it and I have.

Originally, I planned to delete Fb some time in January. I would transfer photos and make my farewells over Christmas break. I had no idea how busy I would be so I thought I’d give myself the month of January. I started transferring some photo albums, then realised what a pain it was to transfer 100s of albums. I also spent the entire month transferring contact details from my Fb friends, which meant going through 700+ contacts to weed out the ones who weren’t my friends.

I realised by the last few days of January that I was running out of time. I didn’t want to have people think I was bluffing or to be discouraged from deleting my account. I refused to deactivate because I would only go back to it within a week or a month. I had to leave. It was time for change. So I announced that I would delete everything on Friday, 1 February.

That Friday night, however, as I was trying to download my Fb archive, I realised that it wouldn’t take 1 hour to download 6.5 years (member since 2006) worth of history from Fb. The next morning, I received an email from Fb, only to be told that my download request had been unsuccessful. I sent a million requests that Saturday but it wasn’t until that evening, just before bed, that my request went through. On Sunday, I downloaded my archive (967.7 MB) and requested Fb deletion. My account is currently deactivated but it will be permanently deleted by Sunday, 17 Feb. For your information, Fb gives you 14 days to decide if you’re 100% certain you want to leave. Well, I am certain.

My friends probably don’t believe me when I say that I am leaving Facebook this month. But I am even though I’m still posting, liking, commenting, and messaging. If they’ve noticed anything, they’ll see that I’ve unliked many pages, deleted some photos and apps, deleted all my notes, and have removed some information.

After 6 years of Facebook, it’s time for me to take a break. I don’t like what it’s done and how it’s affecting all of us. I don’t care if people think I’m being anti-social or being backwards. Yes, there are many benefits to having Facebook. However, I’ve had time to think about friendships, connections, and communication these past few months and here are the reasons why I’m leaving.

Well, what about the good things? Yes, people know there are these disadvantages, these things that no one likes. However, FB has helped keep us connected. I’ve even found people who I used to know from primary school! Plus, FB is like email-messenger/Skype-text in one! You no longer have to write letters or emails and ask people what’s going on in their lives because you can read all the status updates. No more email newsletters because that’s what FB is for. You don’t need to be logged into a million things at once – FB allows you to stay connected via ’email’, ‘Skype’, and ‘text’. Oh and FB is free so you don’t have to waste money on stamps and postcards, Skype calls, texts to those who live far away from you. Without FB, they say, it’s like you’re completely disconnected from the world.

I’ll take my chances then.

Trust me, this was a hard decision for me. As one who has relatives, family, and friends all over the world since I was little, staying connected is VERY important for me. But people don’t really email anymore. Or even Skype. My generation doesn’t call much either. Texting seems to be used for finding people or writing something so secretive that, thankfully, FB doesn’t have the privilege of being used. Maybe I’ve been able to stay connected through FB but I think it’s turned me and you and him and her into lazy people. Why the need to meet up if you’ve already seen everything (photos and updates) on FB? Why the need to call? In fact, have we become anti-social by joining this ‘social’ network?

I didn’t say I’m going to live as a hermit in some unknown land without internet. There’s still the old-fashioned forms of communication: letters/cards, e-mail, text, phone call, instant messaging, meeting up in person.

The question is (for all of us), are you willing to make the effort to stay connected?