Today I am dressed up as Belle from Disney’s Beauty and the Beast and Once Upon a Time. I’m surprised I never dressed up as one of my favourite princesses in the last 20 something years. I’ve been Snow White, Cinderella, Sleeping Beauty, and countless of princesses and fairies.

I didn’t want to spend on a new costume this year though I had considered dressing up as a duck this year (one day, I will and you’ll know why). Thanks to @Duch29_9, @DuchessofBanana, and @SassSthrn, I decided to dress up as Belle this year. During the past month, I’ve been observing the Disney and OUAT’s Belles’ costumes to see if I had anything at home that would work. Here’s what I came up with:

Dress: I’m going with Belle’s day dress. In Disney’s B&B, Belle’s dress is medium blue and her blouse is elbow-length whereas OUAT’s Belle has puffy/buttercup sleeves and a light blue dress. Since I already had a light blue dirndl with a puffy-sleeved blouse, I decided to go with OUAT’s Belle’s costume. My dirndl, by the way, is from C&A and cost less than 35 Euros when I bought it 5 years ago. You can’t find a new dirndl this cheap or in good quality with embroidery and rhinestones anymore. The going price is 60 something euros and up. My dirndl would probably cost 80-100 euros now.
(Disney Belle is wears a white apron but I have a green one. Not wanting to look like I’m going to Oktoberfest, I used my apron as a covering for my basket.)

Shoes: In OUAT, Belle wears John Fluevog’s Everest heels in silver. I happened to have a pair of silver ballerinas from Aldo that I’d worn to my aunt’s wedding a few years ago. Disney’s Belle wears a pair of brown ballerinas but I have only black so the silver ballerinas seemed to be a good cross of the two. I wore faded pink ballet tights (from ballet class) just as OUAT Belle wore white in the TV series.

Cape: Disney’s Belle wears a blue cape as she rides off to find her father and in OUAT S3, the ‘imaginary’ Belle wears what appears to be a black cape (http://images.kpopstarz.com/data/images/full/2013/09/13/102024-1.jpg). Quite conveniently, I happened to find a vintage black/blue (it’s either very dark blue or black) velvet opera cape at Ivan Sayers’ garage sale. This is my first time wearing it out!
(I wore my H&M grey knit cape under the cape for warmth. It’s chilly out there!)

Hair: This morning, I’d wanted to wear it the way Disney Belle wears it: twisted into an inverted ponytail. Unfortunately, my hair’s not as long as I’d like it to be to hold it well so I changed it to OUAT Belle’s hairstyle which is a half-ponytail. I’m using two brown clips instead of a hair elastic.

Props: In the opening scene after the prologue in Disney’s B&B, we see Belle carrying a basket with a book inside. My plan was to find a basket and to borrow a book from the library (after all, her book was from the ‘library’ though she called it a ‘book shop’). I had just about given up finding a basket when the Saucy Milliner (aka the real Mad Hatter) made my day by lending me her beautiful basket for Halloween. I checked out Max Eilenberg’s Beauty and the Beast because I liked the illustrations by Angela Barrett.

Cover of Beauty and the Beast

My OUAT friends (the three whom I mentioned above) suggested I bring a chipped cup and include a photo of Rumple[stiltskin]. I didn’t want to bring one of my fine bone tea cups nor did I want to spend on a dollar store teacup only to chip it for Halloween. Another friend @EkatiSoleil suggested I bring a candlestick holder and call him Lumiere. Splendid idea too but I think it’s somewhere in the storage room. I could still print out a photo of Rumple and draw a heart though. 😉 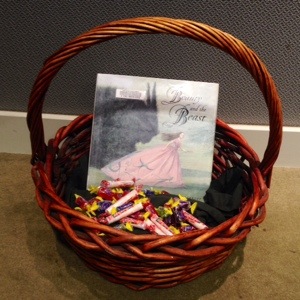 The only thing I did spend money on were the sweets I plan to hand out (though I have somehow swallowed quite a few mini Rockets). Total cost? $3 (before tax). 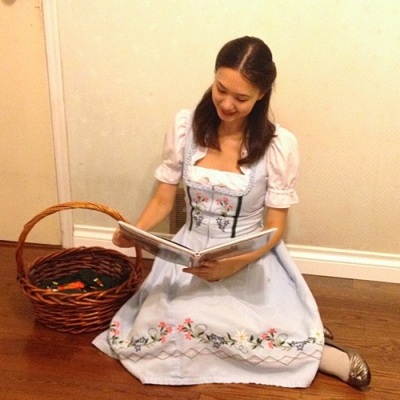 What do you think? 🙂