When I first heard about Patisserie Für Elise last year, I could not wait to try it out. Imagine having afternoon tea in a heritage house, right in Downtown Vancouver (near the library)!

I decided my Mum would be the best person to have afternoon tea with, since she enjoys afternoon tea, macarons and anything cute. Since I had my day off yesterday, we went around 4:20PM. 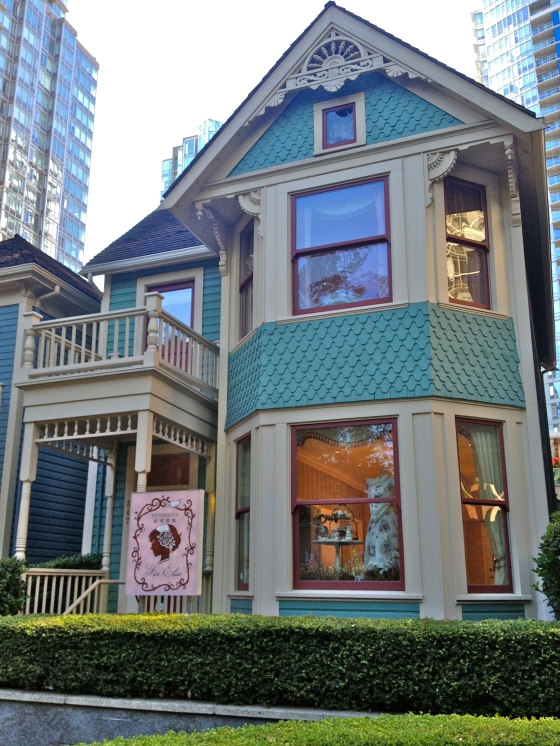 Patisserie Für Elise was started by a couple (from Taiwan, if I remember correctly), one or both of whom had gone to pastry school in France. (You’ll have to ask one of the servers in there for the correct story. I heard parts of it and may have heard wrong.) 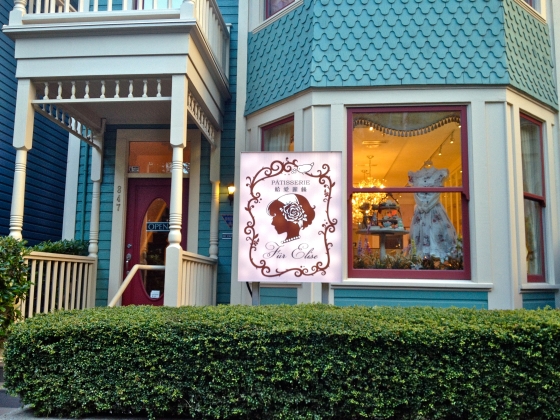 The sign is in English and Traditional Chinese Characters – both mean For Elise. 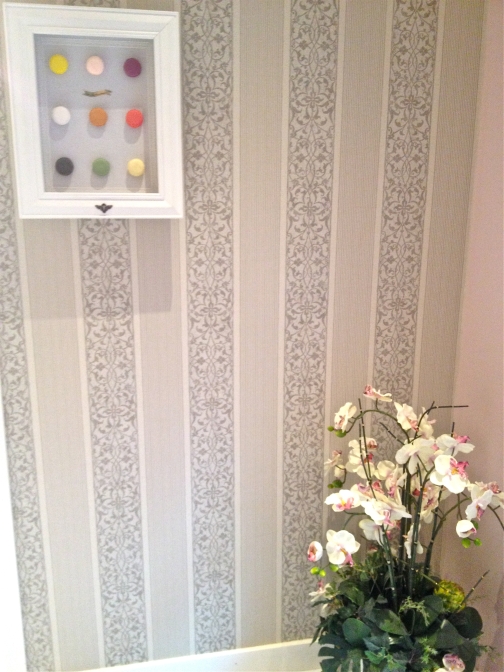 The stairs leading up to the tea salon

As soon as we entered, we were ushered to the top floor where the tea salon was. 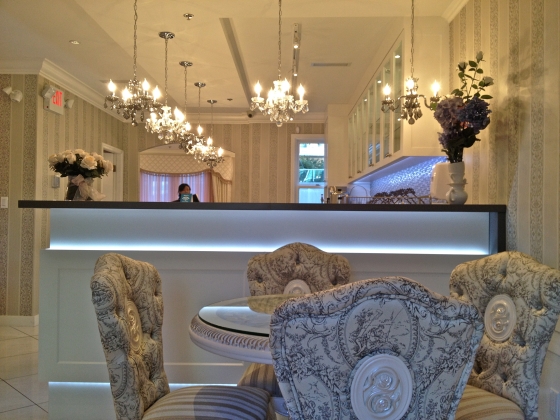 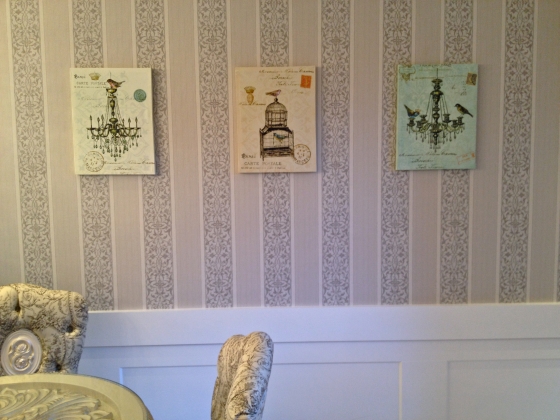 We decided to sit by the window facing Hamilton St. I noticed that the windows were double-paned so we could never hear the 17 Oak bus go by or any cars for that matter. All we could hear was classical music (to be more accurate – mostly Baroque and Rococo), transferring us to another time and land.

One of the servers (and co-manager?) came to us with a 2-page menu. On one side was the set afternoon tea menu, on the other was the selection of teas available. I chose a honey-flavoured tea from Taiwan.

No sooner than we had made our selections, our tea sets were brought to us, along with an hourglass timer. Once the pink sand had sifted to the bottom, our teas would be ready. Since the tea leaves were loose, we were each given a tea strainer to prevent the leaves from going into our teacups.

We were then served a delicious Mandarin orange crème brûlée to enjoy while we waited for our savouries and sweets to arrive.

When at last the two-tiered stand arrived, we worked our way from savouries to sweets. To be quite honest, Mum and I did not find the food particularly delicious but we later learned that it was because some of the former afternoon tea-goers had complained about the flavour. The truth was, these people were not used to what is served in France. They found the sweets far too sweet and the savouries too salty. Not wanting to upset the customers, the owners decided to lighten the flavouring. It’s too bad because I’m sure these customers just needed to be better-informed. If they’re not used to it, then… that’s too bad. (Sorry for being harsh!) 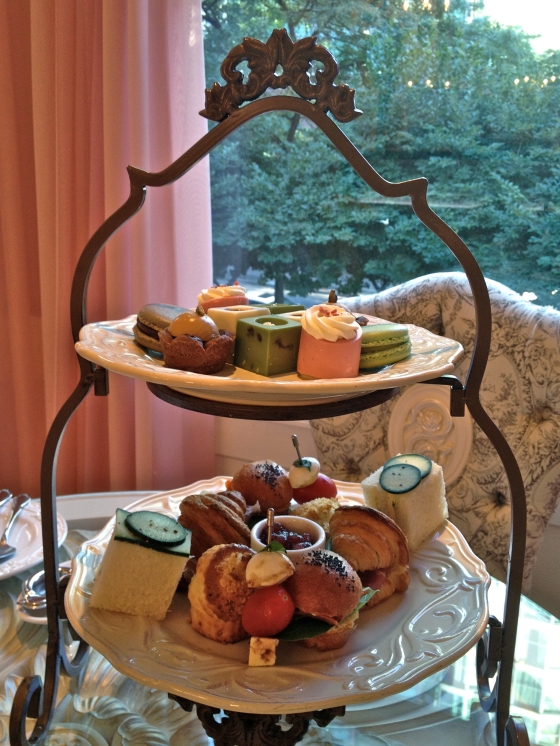 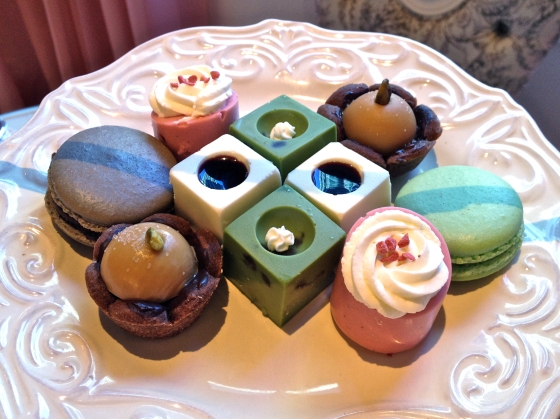 I did not get to try the macarons but my Mum, who is an unofficial macaron conoisseur (she tries macarons in every country she visits), said she did not like them because they were too ‘sticky’. So far, the only macarons my Mum loves are the ones sold at Urban Tea Merchant. Once again, we were informed that this had to do with the customers. Dommage!

After having several cups of tea, I visited the single-occupancy bathroom, which had a vanity table, a sink, and a toilet in another little ‘room’. 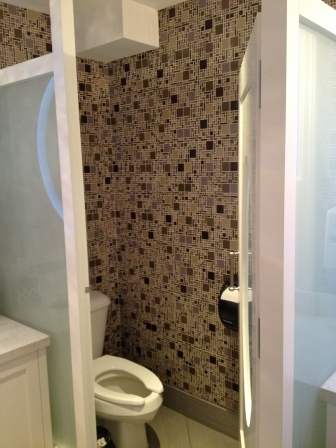 Just in case you didn’t have enough privacy in this 1-person bathroom, now you may use the loo behind a second set of doors! 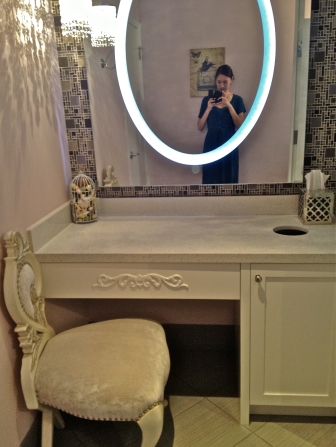 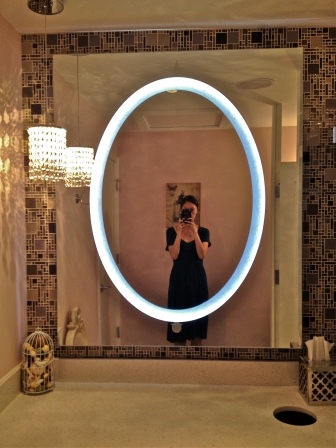 I really liked the illuminated mirror! You half-expect a ghostly face to appear and talk to you.

I resisted sitting down or else I’d have taken an extra 10 minutes admiring the bathroom. 🙂 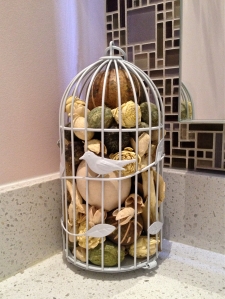 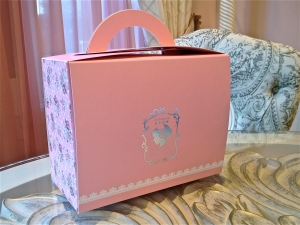 Take away box of croissants

To thank us for our honest opinion (actually, I said not a word. My Mum did the talking), we were offered fresh croissants, which my Mum loved! These were done right. I had these croissants later that evening and have to agree with her. They are delicious!

Before we left, I went around taking as many photos as I could before my phone died and took a closer look at the window display:

I’m not sure if the co-owner (the wife?) started Cinderella in Wonderland, a vintage-and-fairytale-inspired jewellery and accessories shop, but I loved the idea! There’s nothing like dressing up for afternoon tea and pretending you’re from another era. I think there’s only one other afternoon tea house in Vancouver (Steveston, actually) that encourages dress up. At Für Elise, not only do the servers wear the Lolita-like apron dress (see photo), customers are encouraged/allowed to dress up! (Yes, this is Vancouver where one may where whatever he/she pleases, but this is one place you won’t be laughed at for wearing Victorian-inspired dresses!) Apparently, quite a few Lolitas (is that what they’re called? Sorry, this is new to me!) enjoy taking their afternoon tea at Patisserie Für Elise. I plan on coming back for some afternoon tea and next time, I’ll wear my floral vintage dress. 😉

On another note, take a look at their adorable thumb-sized business card! :]